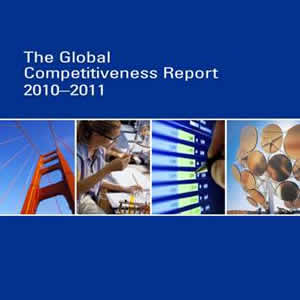 The rankings are calculated from both publicly available data and the Executive Opinion Survey, a comprehensive annual survey conducted by the World Economic Forum together with its network of Partner Institutes (leading research institutes and business organizations) in the countries covered by the Report.

The 2010-2011 shows that the Nordic countries continue to be well positioned in the ranking, with Sweden, Finland (7th) and Denmark (9th) among the top 10, and with Norway at 14th.  Sweden and Singapore are taking the first places and US the forth place.

In the case of Mexico, reached the 66th place and that’s because to its close association with the US business cycle.  According to the report there are some positive and negative aspects concerning Mexico.

New fiscal policies implemented in the past two decades have brought for Mexico the 28th place for macroeconomic stability. Mexico was able to stimulate its economy with a number of anti-cyclical policies.

The report also mentioned that Mexico also has a number of important competitive strengths that are similar to those of Brazil such as: the large size of the market available for local companies (12th); a sophisticated and innovative private sector (ranked 67th for business sophistication and 78th for innovation); well-developed clusters as a support of Mexico Maquiladora Industry (50th) and transnational companies operating throughout the value chain (49th).

Negative aspects over Mexico underline in the report:

The labor market is ranked at a dismal 120th place, with burdensome regulations, high payroll taxes and social contributions (ranked 103rd for flexibility), and a less than- efficient use of talent (122nd).

The reliability and quality of institutions place Mexico at 106th place, with increasing security concerns (134th).

Not very high ranked as it concerns the higher education and training system (79th) , and are taking the 98th position when it come to scientists and engineers.