The Maquiladora Industry: A Brief History 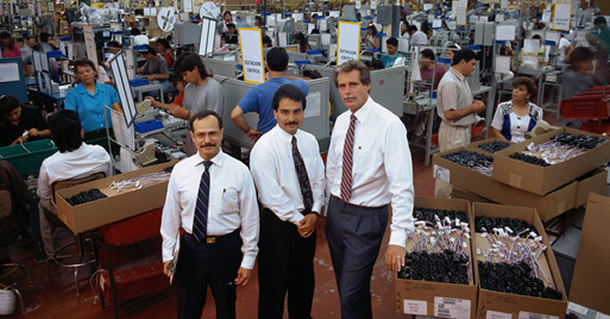 After the end of the “Bracero Program” the Mexican government was forced to implement the Maquiladora Program to alleviate the rising unemployment burden along the border. This is a concept whereby the Mexican government mostly allows the duty-free, temporary importation of raw materials, supplies, machinery and equipment, etc. as long as the product assembled or manufactured in Mexico is exported. The Mexican government also sought to utilize this program to increase the level of “hard currency” and as a vehicle for the transfer of technology. Since the conception of the Maquiladora program, the changes have been dramatic, to say the least!

The first years of the program saw few U.S. companies move to the border areas to take advantage of these incentives. The ones who did and especially the first Tijuana Maquiladoras were mainly in the electronics field since lower priced products arriving from Asia were competitively squeezing them. In addition, the value of the Mexican peso against the U.S. dollar was similar during this time frame, a major factor that made Mexico less attractive from a labor cost perspective.

As the 1970’s arrived, Mexico found itself awash in oil reserves and began to borrow heavily in foreign currencies to expedite the exploration and processing of their “black gold”. Many of us remember the global economic uncertainties of the 1970’s-particularly high interest rates raising havoc on new infrastructure projects worldwide. As Mexico incurred a massive oil based debt, the Mexican economy began to falter, which gave rise to inflation and finally to a serious currency devaluation. These devaluations have since continued, albeit on a less dramatic scale (with the exception of the 1994 devaluation).

The serious devaluation of the Mexican Peso began in the late 1970’s and escalated to the point of the country being in a bankrupt mode in the early 1980’s. As a result of heavy borrowing and high interest rates, coupled with changes in U.S. Customs laws, Mexico became an attractive location for foreign investment.

In the early 1980’s, many U.S. businesses were feeling the “squeeze” from their Asian competitors and had decided that in order to remain in business, lower labor costs were necessary. As they began to look to Asia as an option for their investments, Mexico’s currency devaluation and economic crisis became both an opportunity for U.S. investors looking to go offshore and for Mexico who badly needed hard currency. It was during this period that the Maquiladora industry experienced the steady and substantial growth that has continued to this day.

The Mexican government, recognizing the importance of the Maquiladora industry in attracting foreign investment, signed a special “Decree” in the mid-1980’s. This Decree formally recognized the industry and issued special regulations for the industry to comply. Also in the 1980’s, the Mexican government introduced a 5 year development plan opening the economy to foreign direct investment and encouraging growth of its domestic industries.

This began Mexico’s “Network of Treaties” with Mexico becoming a contracting partner to GATT (General Agreement on Tariffs and Trade). In the late 1980’s the Mexican government further liberalized foreign investment through modifications of the “Regulation of the Law for the Promotion of Mexican Investment and Regulation of foreign Investment”. The NAFTA negotiations began in 1992 and took effect in 1994. Also in 1994 the U.S./Mexico Bilateral Tax Treaty (to avoid double taxation), took effect. Continuing in 1994, Mexico joined the OECD (Organization for Economic Cooperation and Development), in an effort to become a global partner in trade and commerce.

The NAFTA has made Mexico a viable trading partner with the U.S. and Canada and has assisted Mexico in opening up trade with South America and the European Union. It was the high profile of the NAFTA that made the Maquiladora industry more visible to the American public in both a good and bad light. Many people still believe that the Maquiladora industry was a result of the NAFTA-this of course is not true.

There have been many changes to the Maquiladora industry in Mexico throughout the years and many of these changes have been as a result of the NAFTA. Unfortunately the “Rules of the Game” have made it more complicated to operate in Mexico than prior to the signing of the NAFTA. Even though the promotional arm of the Mexican government, SE (Secretary of the Economy), has done an outstanding job in making it easier to obtain permits, etc., the fiscal authorities (HACIENDA) are looking for more ways to increase the country’s revenue through new tax schemes for the Maquiladora industry.

Whether you are new to the maquiladora program or have been involved in the industry for some time, you may desire expert assistance of Made In Mexico, Inc.