US Debt Crisis- the implications on Mexican economy 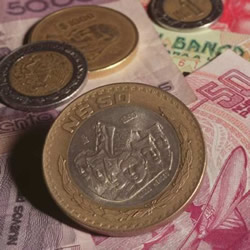 Source: CNN International, CNN Mexico, Embassy of the US in Mexico, Mexico’s Economy

The United States appears to be no closer to raising the debt ceiling than it was in January when the issue arose, but wasn’t seen  a priority since now because of US internal problems. Democrats and Republicans might be further apart now than they were then but their leaders are set to unveil new deficit reduction plans as top officials scramble to raise the debt ceiling.

Much of the public focus is on the nation’s public debt, which is $14.3 trillion.

The International Monetary Fund says the United States must lift the debt ceiling to prevent a “severe shock” to the world economy.

The U.S. is Mexico’s largest trading partner, buying more than 80% of Mexican exports during 2010.  Mexico is the third largest U.S. trading partner after China and Canada.  Bilateral goods trade reached $362 billion in 2010 and in 2009 they totaled $278 billion, especially as a result of the agriculture programs and Mexico Maquiladora Program.

Mexico and the U.S. do as much business in goods and services that it’s inevitable not to think that the US Debt Crisis has no implications on Mexican economy.

Since June Mexico was preparing for an eventual withdrawal of “capitalflows” and thus has been preparing to reduce any risk exposure in case that the US Debt crisis it’s going to take a while.

The trade imbalance that US have with countries around the world isn’t all bad news because it means US transnational companies are willing to invest especially in countries such as Brazil on a larger scale or Mexico.

The strategy to creates jobs and activates the economy is by selling US goods and services to foreign countries, in this case by supplying the US maquiladoras established at the US-Mexico Border.