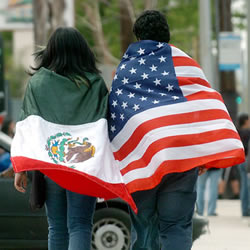 Alabama immigration law takes effect until September 1, that’s way with less than a month from its application; Civil Right groups are trying to stop this law. There is a brief filed on behalf of the governments of Argentina, Brazil, Chile, Colombia, Costa Rica, Ecuador, El Salvador, Guatemala, Honduras, Mexico, Nicaragua, Paraguay, Peru and Uruguay.

Alabama’s measure was modeled on Arizona’s. A federal judge blocked the most controversial parts of Arizona’s law last year after the Justice Department sued, so the story is repeated.

The brief from the Latin American countries mentioned before, argued the law was unconstitutional because it could lead to racial profiling of Hispanics.

The law give local police broad powers to arrest anyone they suspect of entering the United States without a visa, also would impose criminal penalties on employers who hire illegal immigrants, and compel public schools to check the immigration status of students. . In addition, it requires all businesses to check the legal status of workers using a federal system called E-Verify.

It is interesting to see the position on this matter of both US and Mexican governments and how this tense aspect that seems to appear every year, might affect other aspects of US-Mexican relationship such as the economic sector mostly the Maquiladora sector, considering that US is one of top 3 US economic partners.  Mexico’s Ministry of Foreign Affairs for the moment is concerned that the law could violate the civil rights of Mexicans without considering any other aspects of US-Mexico relationships, mostly because of the Obama administration response.

In response the Obama administration has joined critics of the anti-immigrant laws by saying they overstep state authority. Immigration enforcement is strictly a federal government authority, according to Justice Department court documents filed to oppose Arizona’s law.