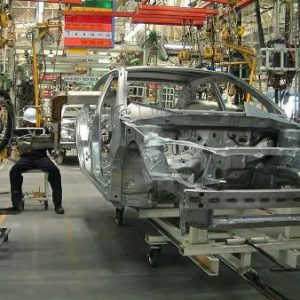 Sources: Global Auto Reports  (Report by Scotia Economics).; Mexican Automotive Report ( The Impact of the Earthquake and Tsunami in Japan of the Mexican automotive Industry)

I can explain this with a few facts:

Japanese companies like Toyota Motor Corp., the world’s biggest automaker, Honda,  Nissan Motor Co. etc, shuts down production  of its plants temporarily in Japan, for   Japanese manufacturers overall, means losses for a couple of months because of disruptions to the supply chain.

Global vehicle demand remains strong. Assembly plant shutdowns in Japan have led to losses in vehicle production of about 37,000 units per day since the earthquake.

The major risk to the global auto and auto parts industry, including non-Japanese automakers, lies in the potential for auto parts shortages globally and its impact on the global supply chain, due to delays of component deliveries by Japanese suppliers. I’m referring first to a unique pigment (important paint additive)  that has been manufactured only in Japan, leaving all the Japanese, US, and European automakers without this component; and second automotive electronic components (computer chips, etc)  in more than 50% has been manufactured in Japan.

The March disasters in Japan affected not only Japanese automakers, it caused repercussions among automakers everywhere because of today nature of motor vehicle supply chain which is highly integrated at a global level. It comes to a conclusion that is necessary to diverse the source for certain parts in case of supply chain interruptions as its happening right now.

Mexican officials from Toyota, Honda, Mazda, Subaru, and Isuzu mentioned that the majority of the assembly plants suffered delays in the delivery of autos and auto parts and also dismissed the possibility that their business plans in Mexico will suffer long term consequences. The opportunities that can come out for the Maquiladora’s plants in Baja California is a consequence of  Japan’s reduction of electric power supply as a result of the earthquake and tsunami that might  shift additional production of automobiles to Mexican assembly plants of Japanese companies.

So far Samsung announced that will expand its plant in Tijuana, Baja California.