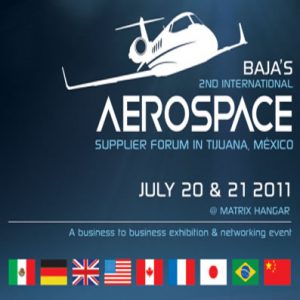 The Forum offers: Strategic business meetings, Networking events, Exhibitor halls, Panel discussions on the business opportunities in the Baja Region, Up to date Conferences on key topics from world leaders in this sector, etc.

This event is the result of a strong Mexican   Government Commitment to promote and consolidate the aerospace cluster in Baja California and to develop the aerospace industry in Mexico who had an intense activity during the past 5 years. This is a consequence of a signed agreement in 2007, between  the Mexican and  the US Governments  called  the BASA  (Bilateral Aviation Safety Agreement), where  the FAA (Federal Aviation Agency recognizes the General Direction of Civil Aeronautics (MEXICO) as an  agency with full capacity to certify any  product or service of any corporation.

Along with the Mexican government (Local, State and Federal Government Agencies), Aerospace Companies located in the region,   Business Organizations, and Academia will make possible this second edition.

Why in Baja California?

The first aerospace company established in Mexico was in 1969 in Mexicali, Baja California.  Most of them where established at the beginning at Mexicali border and Tijuana border, to support  the California (US) based  operations,  especially for the US proximity and lower transportation costs.

Since then Baja California reached  a mature aerospace  environment with companies established  in the city over 40 years  ago, had also  worked on good aerospace educational programs provided by local  universities linked to the industry.

Out of the 11 aerospace companies with international operations listed in the “Fortune 500”, 7 have operations in Mexico and most of them are located in Baja California.

Starting with the 1980 local small and medium sized companies followed the trend as small suppliers of this huge industry.

In 2010, over 380 B2B meetings where conducted at the first Supplier Forum in Tijuana, with the participation of 14 global aerospace corporations established in the region as buyers and over 70 suppliers from the United States, Canada, Europe, Asia and Latin America.

Even this huge number of business meetings it may show a positive response of the forum, it will be interesting to hear how many businesses were closed or are in process after this mass event.

This year are expected more than 500 scheduled business meetings with global leaders such as Eaton Aerospace, C&D Zodiac, Tyco Electronics, Delphi, Parker, Honeywell, Goodrich, Gulfstream, and GKN, among others. At this second forum the attention it will be hold not only at US companies, but also on aerospace transnational corporations from the United Kingdom, Canada and France.